I’ve been asked a lot of questions lately about transgender men and women using bathrooms and parental concerns about sexual abuse.

North Carolina’s House Bill 2 law and similar legislation ban people from using public bathrooms that do not correspond with their biological sex. Proponents of such legislation argue that it’s important because men might otherwise enter women’s restrooms and attack young girls.

Well, I’ve got news for you: You have been sharing public bathrooms with transgender men and women long before North Carolina passed House Bill 2 and well before Target announced a policy allowing transgender people to use the restroom of their choice. We didn’t worry then and we shouldn’t worry now – if people simply embrace fact over myth, acceptance over fear, and follow basic Parenting Safe Children safety rules.

Yes, it’s important to teach children safety rules about using public bathrooms, just like you would educate your child about safe practices for walking home from school. For instance, teach your child to use public bathrooms in groups of two or more and to let an adult know when separating from a larger group to use the restroom. If it’s a younger child, you’ll either be accompanying him or her, or standing outside the door.

In the absence of facts, I believe that people are contributing to a climate of discrimination that hurts transgender people – and does nothing to keep children safe from sexual abuse. In fact, discrimination not only hurts the group whom it targets, but in this case it’s a dangerous distraction. I urge people to redirect their focus to meaningful ways of keeping children safe. 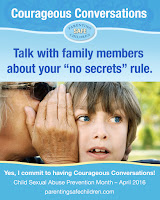