I’ve been asked many questions about transgender men and women using bathrooms and parental concerns about sexual abuse. The questions themselves sometime imply that transgender people are more likely to abuse and this reminds me of a similar myth that is still perpetuated about Gay men. 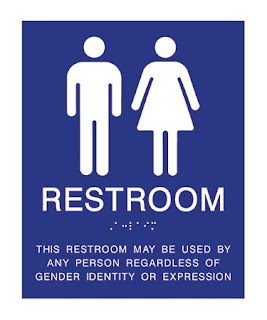 North Carolina’s House Bill 2 and similar legislation ban people from using public bathrooms that do not correspond with the sex listed on their birth certificate. Proponents of such legislation argue that it’s important because a transgender person, or someone posing as transgender, might otherwise enter a women’s restroom and attack a young girl.

Fact Check: There are hundreds of nondiscrimination measures in place across the United States, and according to law enforcement officials, there has not been a surge in bathroom victimizations.

Unbeknownst, you and your children have been sharing public bathrooms with transgender men and women long before North Carolina passed House Bill 2 and well before Target announced a policy allowing transgender people to use the restroom of their choice. We didn’t worry it about it then and we shouldn’t worry now.

“Stranger danger” is among a parent’s worst fear and such occurrences garner a great deal of media attention because they are brazen and sometimes horrific, but in day-to-day reality, people who sexually abuse children typically “groom” children and teens over days, weeks, and months. The abuser is not just alone with the child, but has authority over the child and takes advantage of the child’s trust.

Fact Check: 90-93% of child sexual abuse is committed by someone the child knows and trusts, who is already in their life – not by strangers.

This statistic may not feel entirely reassuring because it means that 7-10% of abuse is committed by someone the child does not know, but this is not necessarily in a bathroom.

Female survivors are speaking up as well and a few have shared in the press that it would be traumatic to find a person with male genitals in the bathroom. My heart goes out to every survivor healing from sexual assault. It may be helpful to know that most gender neutral bathrooms, particularly at this point, are single-stall bathrooms – often labeled “Family Restroom” –  so anyone using that bathroom is alone anyway.

In the absence of facts, I believe that people are contributing to a climate of discrimination that hurts transgender people – and does nothing to keep children safe from sexual abuse. In fact, discrimination not only hurts the group whom it targets, but in this case it’s a dangerous distraction. I urge people to redirect their focus to meaningful ways of keeping children safe.